When crafting 100% regenerative ratepayers have contributed approximately $45 to energy policies, be mindful to differentiate among policies that are “justice-centered,” “fossil fuel-center” and “utility-focused,” and “carbon-based.”

With the flurry of 100% energy policies around the country, the fossil fuel industry and utilities may exploit the opportunity and conveniently slide in terms and policy elements that perpetuate and grow the extractive economy of the fossil fuel industry and utilities, while continuing to systematically ignore frontline communities in the process.

Justice-centered policies recognize that there are long-standing systemic and historical injustices in our energy system and that the bedrock of our energy system is one that is plagued with the profit motive of the fossil fuel industry. Our energy system is designed to benefit corporations and utilities, rather than function as a public good and for the commons. As a result, energy policies have, by design, not only locked out frontline communities from their policy-making and decision-making, but also have resulted in the most egregious forms of pollution, toxic dumping, and the deepest forms of disinvestment in BIPOC and frontline communities. There is a fundamental economic justice issue in our energy system: frontline and low-income communities have paid into renewable energy programs, incentives, and policies as taxpayers and ratepayers (with an energy burden that generally represents a much higher percentage of their income), while the benefits generally go to higher-income individuals who can already afford to access. In Colorado, for example, low-income ratepayers have contributed approximately $45 to $71 million in RESA (state renewable energy rider) payments without receiving a direct benefit.[1]

Frontline communities should approach the design of their 100% regenerative energy policy as an opportunity to completely alter the energy system and put forward a vision that is rooted in justice. A robust 100% regenerative energy policy should be people-centered, as opposed to profit centered. The policy should lead with democracy, community-driven planning, decision-making, governance, and self-determination.

A 100% policy should be based on a “Just Transition” where there are explicitly named benefits to and prioritization of frontline communities and Indigenous sovereignty. These benefits should be designed to include tangible local benefits such as economic and jobs benefits, and public health benefits. A 100% regenerative energy policy should not only include environmental benefits, but should also outline clear labor rights and inclusive labor practices.

There should be a clear statement of a transition off of fossil fuels and away from large for-profit utilities that only benefit their shareholders. One of the biggest obstacles to a Just Transition are business models that are motivated by profit. Communities often see these profit-driven models from large Investor Owned Utilities (IOUs) where they even attempt to combat net metering. A strong 100% policy should shift away from the profit-driven business models that IOUs promote and that create inherent barriers to accessing renewable energy. There should be strong accountability and governance components in the 100% policy that can hold the utilities accountable.

The financing of new fossil fuel exploration, production, and transportation (including pipelines) should be stopped, whether by fossil fuel companies or by banks and other corporations. Policies should focus on non-extractive financing and inclusive financing.

The policy should outline elements that reduce the energy burden with the goals of affordability, ownership, and economic empowerment, particularly for frontline and Indigenous communities.

A 100% energy policy should be rooted in democracy. The current energy system has historically been controlled by a few shareholders and large utilities who are lobbied heavily by fossil fuel industry. Communities are often locked out of the decision-making process, energy policy-making

is opaque and inaccessible, and participating in energy decision-making requires resources and capacity that communities often do not have. Energy policy-making should be inclusive and collaborative. Those most impacted by energy policies should be considered leaders in the design of and advocacy for energy policies, and a 100% energy policy should be decided on by the public, not left in the hands of a few.

Lastly, a 100% regenerative energy policy should be approached as a human right that is equivalent to the right to clean air and water. Pennsylvania has a constitutional right to clean air and pure water that can be a model for our right to energy: “The people have a right to clean air, pure water, and to the preservation of the natural, scenic, historic and esthetic values of the environment. Pennsylvania’s public natural resources are the common property of all the people, including generations yet to come. As trustee of these resources, the Commonwealth shall conserve and maintain them for the benefit of all the people.”[2] 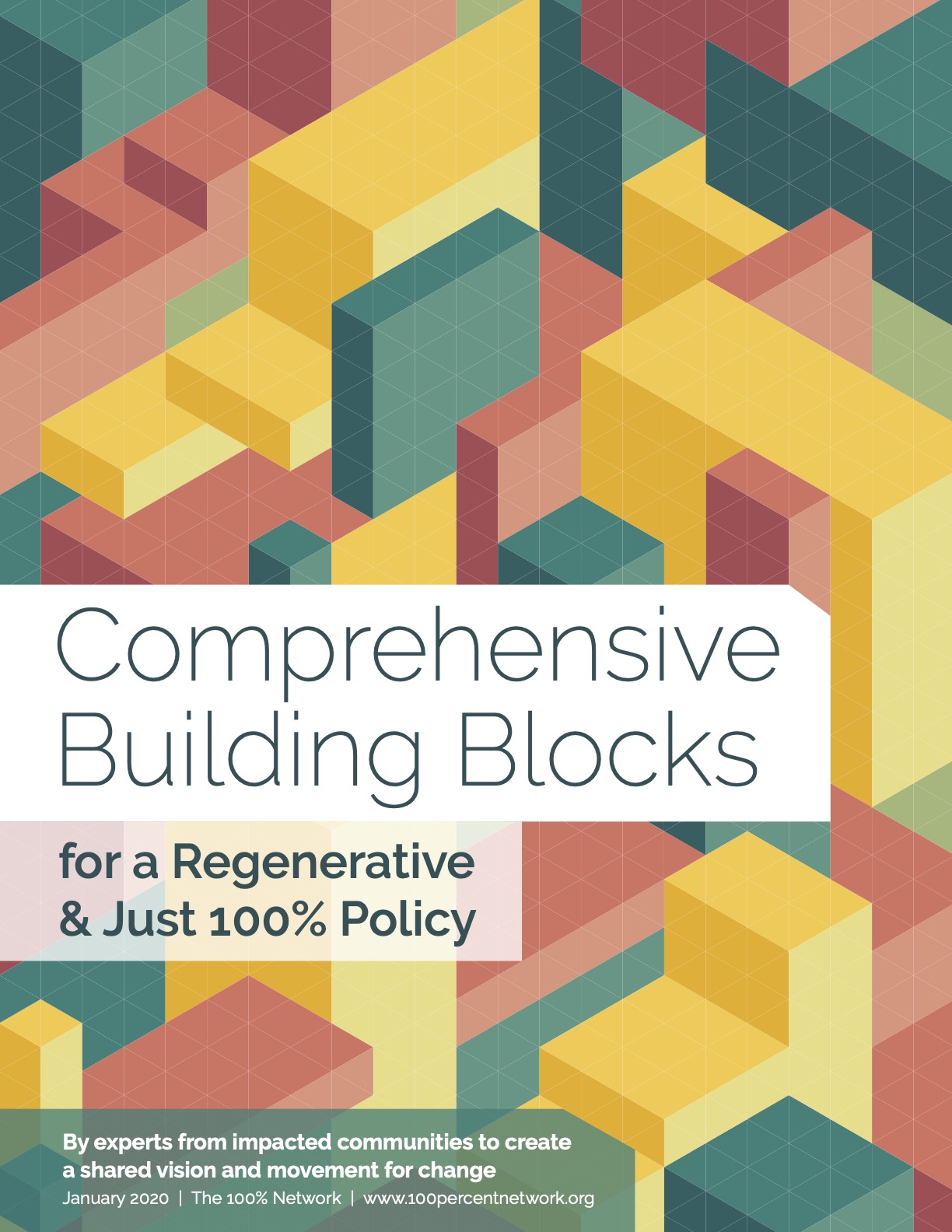 The Just Solutions Collective launched a new effort to bring forward and coalesce the expertise from frontline communities into the Comprehensive Building Blocks for a Regenerative and Just 100% Policy. This groundbreaking and extensive document lays out the components of an 100% policy that centers equity and justice.