A Just Transition is a fundamental shift from an extraction-based economy to one that is democratic, equitable, and regenerative. 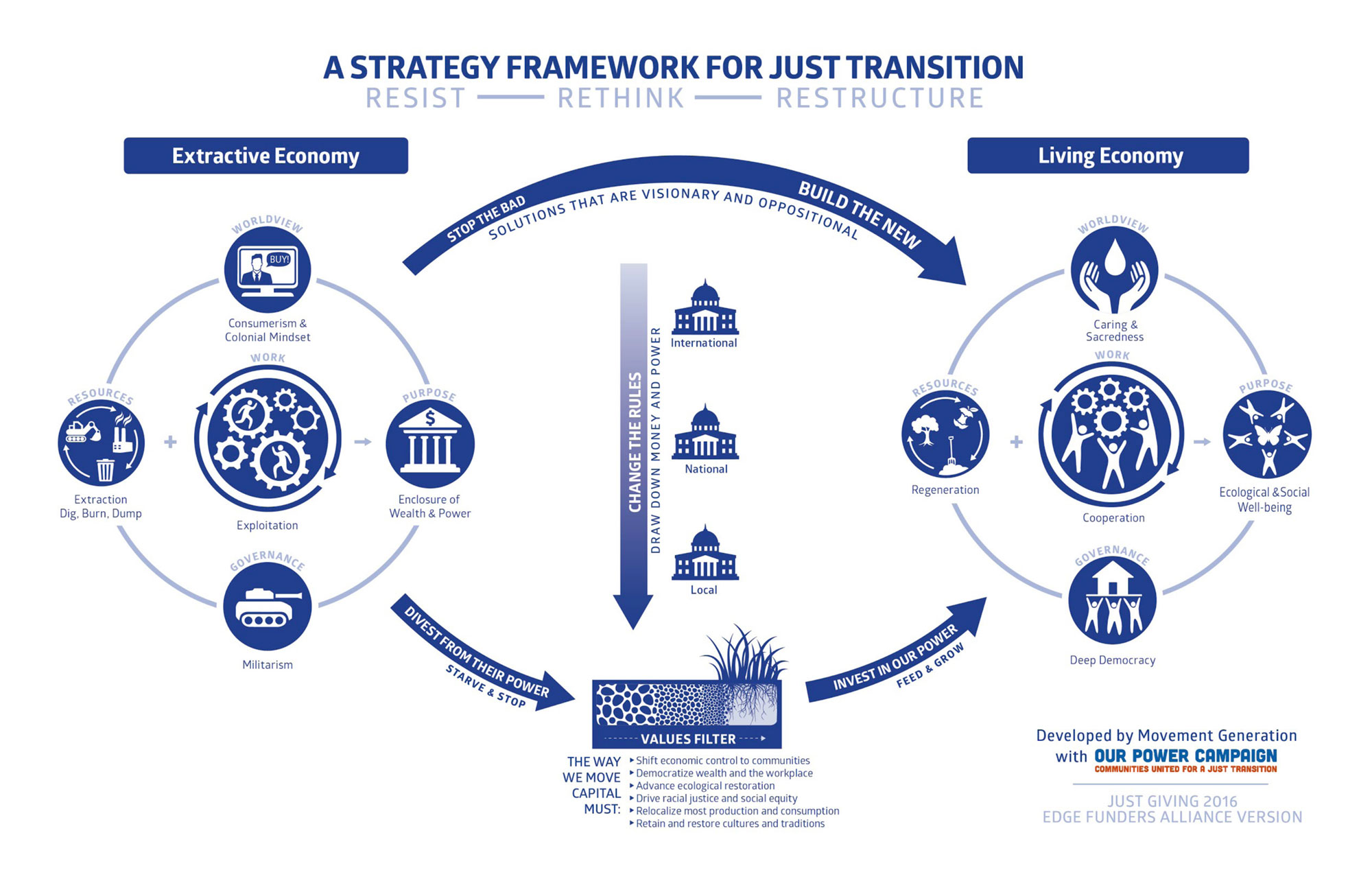 A framework for a fair shift to an economy that is ecologically sustainable, equitable and just for all its members. After centuries of global plunder, the profit-driven, growth-dependent, industrial economy is severely undermining the life support systems of the planet. An economy based on extracting from a finite system faster than the capacity of the system to regenerate will eventually come to an end—either through collapse or through our intentional re-organization.

A Just Transition requires us to build a visionary economy for life in a way that is very different than the economy we are in now. Constructing a visionary economy for life calls for strategies that democratize, decentralize and diversify economic activity while we damper down consumption, and (re)distribute resources and power. Just Transition initiatives shift the economy from dirty energy to energy democracy, from funding highways to expanding public transit, from incinerators and landfills to zero waste, from industrial food systems to food sovereignty, from gentrification to community land rights, and from rampant destructive development to ecosystem restoration. Core to a Just Transition is deep democracy in which workers and communities have control over the decisions that affect their daily lives.[1]

Just Transition moves away from profit-driven corporations and fossil fuel industries, such as oil refineries, gas power plants, coal plants, and large pipelines. Just Transition addresses past harms, especially those committed against Tribal nations who have suffered the destruction and contamination of their land, air, and water.

Just Transition focuses on deep energy democracy where frontline communities are represented and are leaders in decision-making bodies, and where we shift money out of politics and into regenerative energy structures and economies. Many states and local equitable energy and climate justice policies are adopting definitions of Just Transition and are utilizing the Just Transition framework to address systemic inequalities that have long-plagued energy policies, and to imagine a people-centered and just energy system.

Example of support for a Just Transition from Indigenous communities in New Mexico: “Despite providing electricity to the rest of the state for over 56 years, our people continue to go without adequate access to water, electricity and roads. A Just Energy Transition bill would address these structural inequalities to invest in the infrastructure we need to build a just economy.”[2]

Prioritizing Communities
PUSH Buffalo: Green Development Zones as a New Model for Economic Growth
In their influential article “The City as Growth Machine” and in subsequent work , John Logan and Harvey Molotch assert that regional economic growth is best understood through analysis of the coordinated investments and power maneuvers of a small set of inter-locking regional elites in banking, real estate development, construction, energy utilities and politics.
Prioritizing Communities
Front and Centered: Policy Applications of the Washington Environmental Health Disparities Map
The new Washington Environmental Health Disparities Map is a science-based tool that combines data on pollution and vulnerability to pollution to compare the cumulative impacts for Washington communities statewide. The Map has many applications, including designating communities with cumulative impacts, prioritizing resources, hiring, and enforcement; and improving land use regulation, public participation and accountability, and data accuracy. 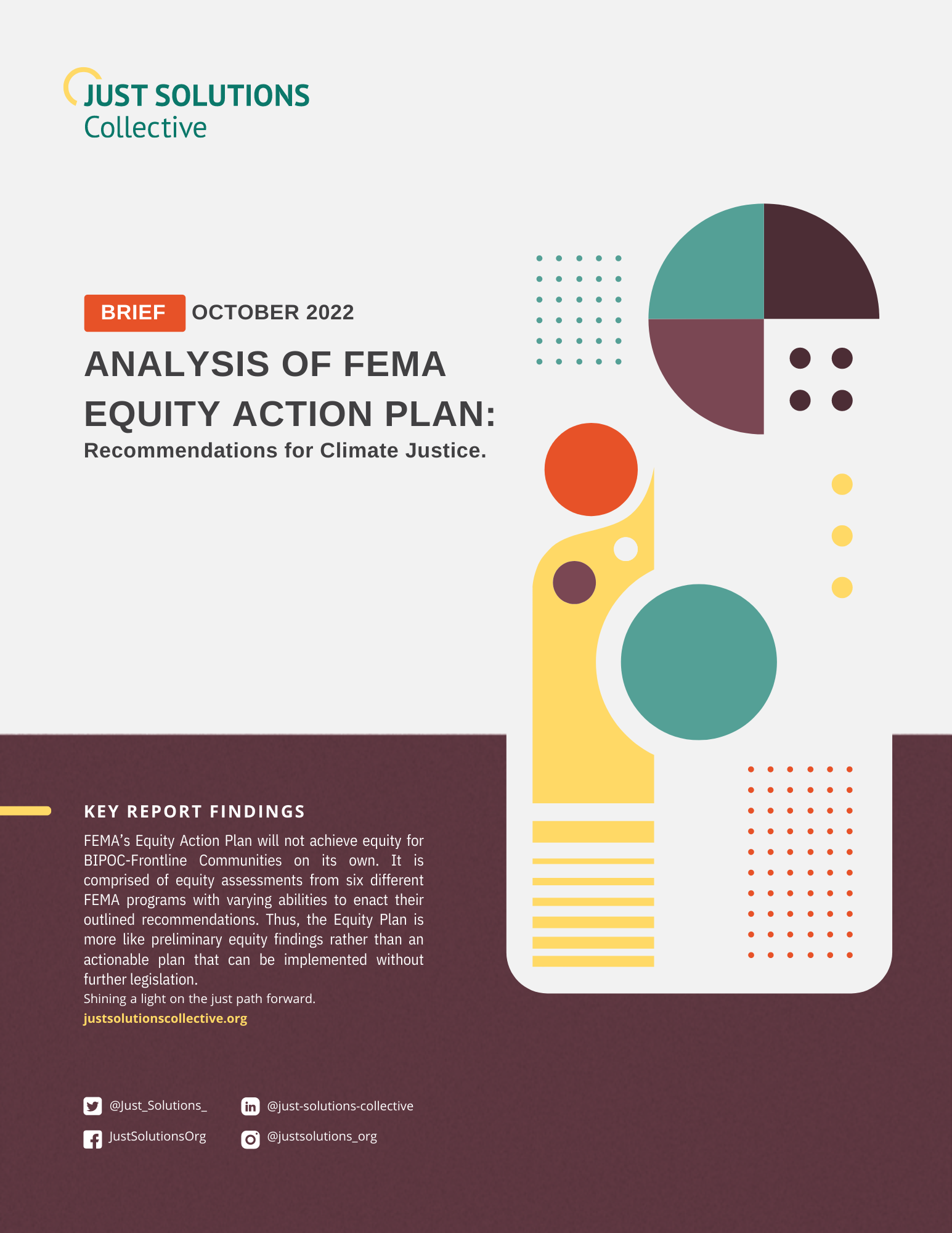