The Road to Equity: Concerns and Analysis of RUC Pricing Mechanisms

As states, regions, and cities aim to transition to a clean energy future, many search for new transportation strategies and funding mechanisms. Equity and tax progressivity considerations need to be a part of any road pricing conversation, to transform the way regions raise revenue for transportation and ensure equitable and progressive transportation funding during the phase-out of fossil fuels. 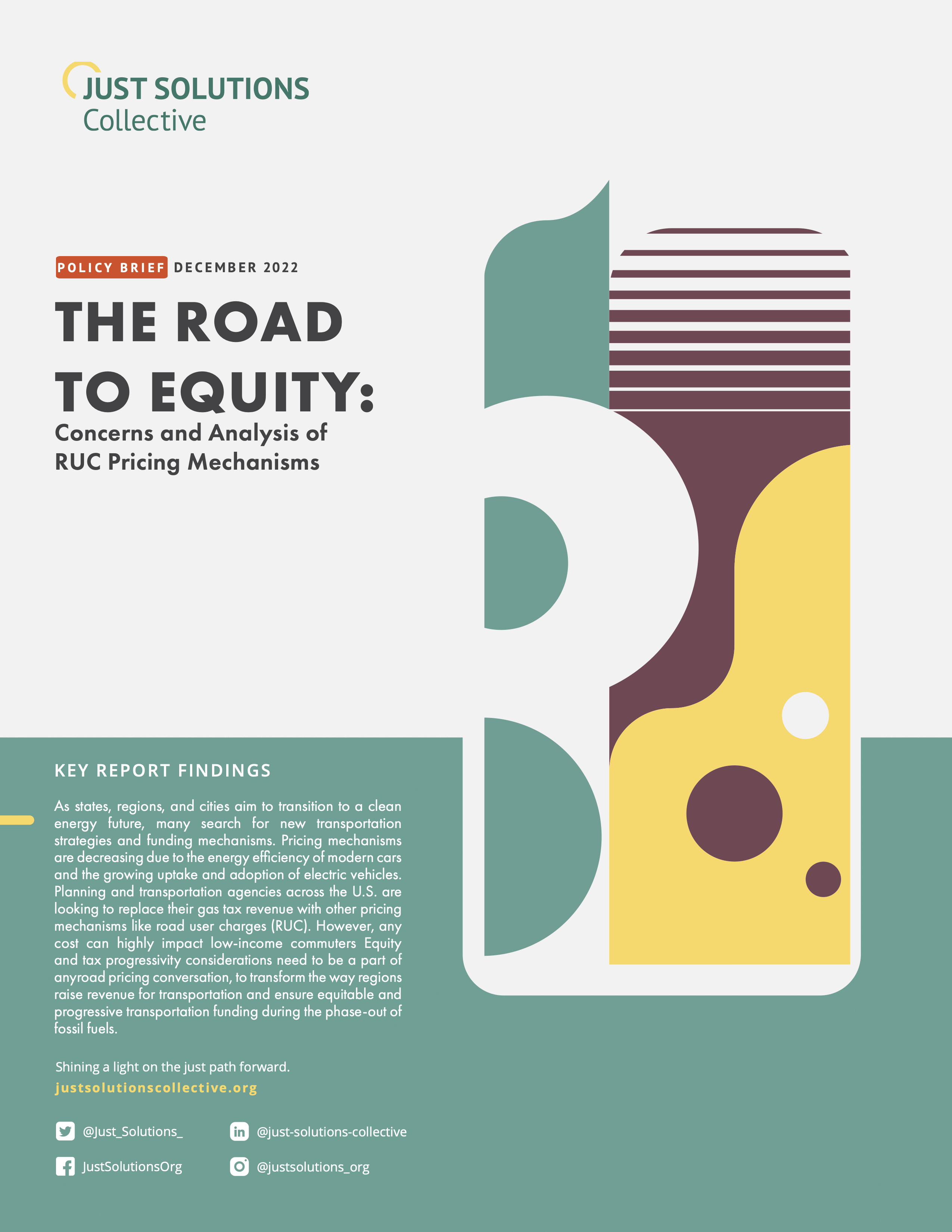 As states, regions, and cities aim to transition to a clean energy future, many search for new transportation strategies and funding mechanisms. Pricing mechanisms like gas tax revenues or the Highway Trust Fund revenues are decreasing due to the energy efficiency of modern cars and the growing uptake and adoption of electric vehicles. Planning and transportation agencies across the U.S. are looking to replace their gas tax revenue with other pricing mechanisms like road user charges (RUC). However, any cost can highly impact low-income commuters already dealing with a lack of affordable public transit and affordable housing that causes them to live further from cities and rely on cars to go longer distances. Many low-income families have no option but to drive to work. Furthermore, any reliance on regressive taxes, meaning those with lower incomes pay more, will add to their challenges to make ends meet. Equity and tax progressivity considerations need to be a part of any road pricing conversation, to transform the way regions raise revenue for transportation and ensure equitable and progressive transportation funding during the phase-out of fossil fuels.

The following analysis aims to inform and better prepare community-based organizations (CBOs) and state advocates to participate more confidently in the conversations on road user charges and pricing mechanisms as they are discussed from state-to-state. If thoughtfully developed and implemented, these transportation funding mechanisms and strategies can also address climate, health, economic, and social equity in communities historically and disproportionately burdened by transportation inequities.

For the long-term success of road pricing programs, policy, and state climate advocates recommend the following:

Oregon: Oregon enacted the first bill (HB 3946) to study alternative transportation funding sources other than tax fuel in 2001, they were also the first to adopt and implement a pilot fuel-tax user charge. The Road User Fee Task Force (RUFTF) was created to lead the policy development of creating sustainable revenue to fund the repair and maintenance of roadways. They established their first RUC program in 2015, OReGO, which has been modified since. The permanent voluntary program is functioning with about 700 volunteer drivers and 2,100 vehicles enrolled to date and working to expand eligibility. The Oregon Department of Transportation's (ODOT) RUC program consists of four main objectives: evaluating compliance mechanisms; exploring interoperability; expanding the market via technology options, streamlining account management, developing new mileage reporting options, and sharing data with other public entities; and increasing public awareness.

Washington: In 2012, Washington’s Legislature enacted HB 2190, which directed the Washington State Transportation Commission (WSTC) to create the RUC Steering Committee to provide direction and guidance on transitioning to an RUC system. In July 2018, WSTC initiated a pilot project to test an operational RUC program using a flat per-mile rate. About 5,000 drivers volunteered to be one of 2,000 drivers participating in the year-long Washington RUC Pilot Project. In 2019, HB 1160 created the 2020 Road Usage Charge final report, which addressed topics such as privacy, rate-setting, and compatibility with tolling systems. It also required the state Department of Transportation to submit recommendations that considered the impacts of RUC on low-income households, vulnerable populations, and displaced communities. The report also recommends phasing in RUC over the next 10 to 25 years.

California: In 2014, the California State Legislature passed SB 1077, establishing a road charge pilot study and a Road Charge Technical Advisory Committee (Road Charge TAC). In 2016, California’s Road Charge Pilot Program was launched and lasted nine months. More than 5,000 vehicles participated through six different reporting and recording methods ranging from manual to highly technical methods with optional location‐based services. In 2017, the California Road Charge Pilot Program Final Report was published, the report was part of Senate Bill (SB) 339 (Wiener, Statutes of 2021). The findings from the pilot recommended further research on the impacts of RUC on disadvantaged communities. The Road Charge TAC was extended until January 2027 and directed to make recommendations about the RUC pilot by July 1, 2023, on the design of a pilot to test revenue collection, including the group of vehicles to participate in the pilot, and a final report is due to the legislature by Dec. 31, 2026.

Lead Contributor: Just Solutions Collective would like to thank Vivian Satterfield, Director of Strategic Partnerships at Verde for her contribution and leadership to this work.

Transportation
Prioritize local distributed/decentralized generation and microgrids
There are myriad DG benefits, such as reduced dependence on transmission lines, societal benefits of community visibility and accessibility, and jobs and local economic opportunities.
Transportation
Generation and grid policies should lead to local renewable energy and ownership
In order to achieve a successful 100% regenerative policy that is justice-centered, the policy should ensure that both the generation and the grid are equitable and community owned.
Transportation
EPA: Environmental Justice Primer for Ports, Impacts of Port Operations and Goods Movement
With each plan, project or program, port agencies have an opportunity to promote environmental justice and equitable development by seeking ways to reduce impacts and increase benefits to near-ports communities. This section describes common health and quality-of-life impacts on near-port communities that ports agencies can begin to remedy through more equitable decision-making.